I want to personally thank each and every attendee, sponsor, vendor, volunteer, team member, and everyone else from the bottom of my heart for your outstanding support and professionalism leading up to, and during, TechNet 2016. Although this year we saw less traffic than last year, everyone I spoke to was impressed with the agenda, speakers, panels and panelists, and the overall event itself. TechNet 2016 was definitely a success!

We developed and executed on a really aggressive menu, and it paid off for the most part. This was the first year where we saw more Japanese participation than American.

The Kick-Off Dinner was, by far, the most successful one we have ever thrown. Approximately 150 people joined the festivities, and I heard nothing but good reviews on the menu changes this year. The New York Steak and the Swordfish were delicious. The chocolate lava seemed to go down the middle. Overall, the dinner was a huge success even though I had to throw together a last minute keynote presentation.

Special shout out and thanks to Shepp and his outstanding leadership of the volunteer crew. You did great work, and your team was awesome in every way, shape, and form. Everyone I spoke to was highly impressed with the registration desk. Official “thank you” letters forthcoming to the volunteers.

Thanks to John C for helping with various tasks during the three days, especially setting up and tearing down, and just being there whenever we needed something. You were like the best sixth man any basketball team could ever ask for.

Many thanks to Bridget for all the reminder emails, publicity, and marketing in the lead-up to TechNet 2016. Without you, the word never would have gotten out to the public.

Thanks to Terry for throwing together those Sanno Banquet Guest Lists at the last minute. This allowed people to enter the Sanno facilities without issues. I did not hear about any major problems, other than a couple folks who were neither American or Japanese.

Thank you to Rich for the help with the New Sanno coordination and the lead-up to TechNet w/the agenda. You were my right-hand man, and we would not have been able to get this done without your assistance. All those meetings w/Riley about agenda, and then getting payments in, Sanno coordination. I cannot forget those dinner menu’s and event agenda – they were sexy!

Thank you to Bobby for all the backend work you did on the transportation, honor guard, the tables, and the other odds and ends I totally would never have remembered to take care of without you being there. Without your involvement, we never would have had an area for the vendors to setup shop.

Lastly, a very special thank you to Tatem for the outstanding national anthems at the Kick-Off dinner. Consider me super amazed at how awesome her voice is, and how well she sang in Japanese. The pronunciation was on-point, and I am highly impressed. Bobby, I think you have a future Taylor Swift right in front of you.

If I missed anyone else, it is not by choice, but old age and senility. Apologies ahead of time.

Thank you to all the vendors and sponsors, especially Riley from Cisco and Cisco Systems for the best support I could have asked for. Special thanks to Andy from Dell Federal, IronBow, and Chris from EMC. A very special thanks to all our sponsors and vendors for TechNet 2016. As a not-for-profit association, we could never put on these events without your support:

A very special thanks to Softbank for sponsoring our registration desk with the iPad’s used for check-in, as well as allowing Pepper to join all the fun.

In the coming weeks we will communicate to everyone about the dates for 2017. In the interim, we are looking to move back to the February or March timeframe. More details later.

One final thank you again to Riley and Rich. We would not have had an event if it were not for you two. Cheers! 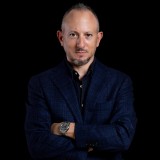 Scott the current AFCEA Tokyo Chapter President, is addicted to the internets, eat miso soup with dinner every day, and will one day own an Empire resembling the Death Star, but without that single, fatal design flaw. His primary passions in life are Apple, technology, security, American football, movies, music, and food. There isn't a gadget that does not interest him, even at a superficial level.

© 2005-2018 AFCEA 東京 TOKYO and all respective authors, attributed or otherwise. All rights reserved.